Let’s talk about how much I love Laos.

I’ve recently caught the travel bug. It started when I set off on my 6 month internship placement in the Philippines. I’ve been travelling back and forth to Thailand since I came to this side of the world.

The travel bug is a hard thing to shake… Lucky for me, my mom caught it too. So we decided to make a little list of places we wanted to explore before I have to go back to Canada. Having a home base in Bangkok really helps explore SE Asia… There’s like 6 countries in the immediate vicinity of Thailand that are about an hour flight away.

We started with Laos… & lemme tell ya, it did not disappoint.

First, we flew from Bangkok to Vientiane, the capital of Laos. Took a taxi to get settled in our boutique hotel which was only about a 15 minute drive from the airport. Dropped our bags in our room, grabbed a little city map and set off to explore the city!

Vientiane is a quaint city but is clearly undergoing industrialization. On the way to downtown, we stopped by a couple of temples.

I didn’t get a photo of the whole temple but this is inside the compound. This temple is believed to be the oldest surviving temple in Vientiane. It was built between 1819 and 1824… Apparently. It’s now been converted into somewhat of a museum where you’re required to pay a small entrance fee that goes toward restoration of the temple and the Buddha’s within it. 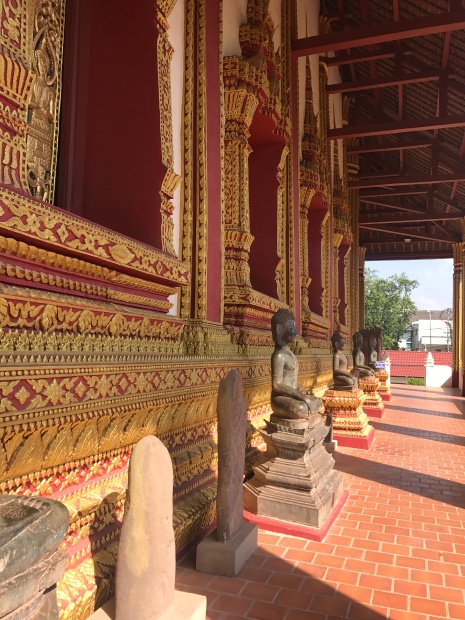 Again, didn’t take a photo of the whole building BUT, the original temple was built in the 1500’s but after being destroyed multiple times, the structure that stands today was built by the French between 1936 and 1942. This was during the time that the French Indochina occupied the region that we know today as Laos. 1993 was the last time this structure was restored back to a buddhist temple from a museum.

To be honest, this is about all the cultural exploration we did in Vientiane. From our research, we had a bit of a different idea of what the capital city would be like. That was our first mistake, never travel with preconceived notions!

We spent the next day wondering the city yet again. We stopped by the Patuxai, which was really cool! Located in the centre of Vientiane, this Victory Gate or Gate of Triumph was built from cement donated by the US for the purpose of building a new airport… Instead, this monument was built and dedicated to those who fought for independence from France… Beautiful. Even I couldn’t get to the Arc de Triumphe like I had planned to this year, I’m so glad I got to see its twin in Vientiane, Laos.

We flew out that evening to our next destination, Luang Prabang.

Luang Prabang… *heart eyes* A magical place. The entire town is a UNESCO World Heritage Site established in 1995. It was enlisted due to the high degree of architectural, religious and cultural preservation. If I was on the committee, I would have added that this town is legitimately magical.

Full of character and charm, the entire city glows with beauty. Home to the kindest and most hardworking people… I was so impressed by the locals and how well they all spoke English. When I travel to a new place, I try to learn as much as I can about their language and/or the way they communicate. But they already learned everything about ours… Incredible. We asked the manager of the guesthouse we stayed in and he said that the locals learn English specifically for tourism purposes, which I am just so amazed and impressed by. Such dedicated, hard working and kind people. Many of them drop out of school at an early age and begin working in tourism. So the fact that they were still devoted to learning a second language to be more versatile employees… kudos, beautiful people.

Our guesthouse was able to book us a spot in a van to take us to Kuang Si Falls located 30km outside of town. On the way up to the cascading falls, they have an enclosed habitat for rescued Sun Bears that were victims of poaching. The falls themselves, were beautiful and freezing cold. Gave me flashbacks to those glacier lakes back home in Alberta… 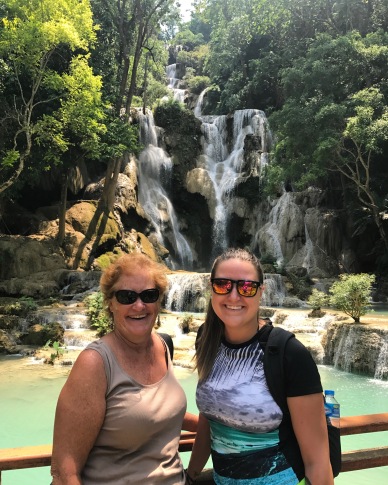 Mama & I at the main waterfall at Kuang Si falls!

The next day, we felt like a long tail boat ride up the Mekong River to visit the Pak Ou Caves. There was a guy that offered us our very own private boat ride. Though it was quite a few Kip (local currency)… we took him up on his offer to get away from the crowds.

2 hours later… we arrive at what appears to be a big old cliff with a set of stairs built into the side of it.

Entrance to the Lower Cave at Pak Ou Caves

Yep. That’s exactly what it was! Mom counted like 260 something steps to the upper cave (staircase to the left of this photo). So we definitely had our exercise after our relaxing boat ride!

In the upper cave were hundreds of Buddha statues. Some old, some new, all were respected.

Worship mat and Buddha’s at the Lower Caves

We weren’t the only ones in the caves… a few other tourists, but then came a large group of people getting ready for worship. We conversed with a guy from the group, who told us they all came from Vietnam, bringing hundreds of handmade lotus shaped candle holders with them.

Then we watched as they positioned the candles in the centre of the cave which was a slightly raised platform that was roped off. As we watched the candle placement… we noticed something quite familiar about the symbol they made with the candles…

Before you freak out, relax. Mom & I thought this was quite a curious and eery thing to see as well… BUT. Instead of being close-minded and judgmental, we first asked a man in the group what it was about and then we put it on the back burner and did some research.

This is what we discovered:

The man told us that this is a symbol of Buddha. They come here to this cave to worship Buddha because the legend says that Buddha used to be here. There was a very large Buddha statue in this cave that vanished from the cave one day, but was too large to have been able to fit through the entrance. So they believe that Buddha simply, left the cave. They use the Swastika (the actual name of it) to “call on” Buddha during their worship. All in all… A very cool thing to witness. The group of people were very cool about the tourists (like me) taking pictures and filming during their worship.

Later that day, mom and I looked it up. Indeed, the Swastika was a symbol used within various religions like Buddhism and Hinduism as well as in Ancient Greece, before it was adopted by Hitler as the symbol for the Nazi’s. “The word ‘swastika’ is a Sanskrit word (‘svasktika’) meaning ‘It is’, ‘Well Being’, ‘Good Existence, and ‘Good Luck’”. However, there are different names for the symbol in different countries. The earliest swastika found was 12,000years ago in the Ukraine… So don’t fret. In my research I found that in Buddhism, the swastika is a symbol of good fortune, prosperity, abundance and eternity. Also, it is said that the swastika symbol contains Buddha’s mind.

I’ve attached a link with more detailed information on this subject below this post, so you can see for yourself.

The night market in Luang Prabang runs every night from 6pm until 11pm. If it’s a slow night, they might pack up early. The market has similar things to Thailand.

You’ll never be far from a scarf/pashmina, lemme tell ya.

I bought my new favourite necklace and ring from a beautiful, kind women. She handmade it. I paid 70,000Kip or $10CAD for it… Amazing. Mom bought a beautiful overnight bag and she got some skirts made by the sweetest woman! Everything was handmade and so inexpensive for the beauty and quality of it all.

Mama got some new skirts made by this beautiful soul!

We had only a short time there, but Laos was incredible. If I wanted to pass on any actual advice onto y’all, I’d say:

“Skip Vientiane. Spend all your time and money in Luang Prabang, for real.”

Luang Prabang: Lakhangthong Guesthouse (Incredibly beautiful… Beyond amazing treatment. Unfortunately it was noisy but that’s not at all the fault of the hotel).

My name is Christa. I like to think of myself as a sojourner. Never in one place for too long. I want to experience new things, new places and new people! You do too? Well then we'll be great friends! Give my blog a read every time you feel like you don't know what the heck you're doing. You'll notice I have no clue either... But that's what makes life fun! We're just here temporarily after all.